Coastal Vignettes are graphic representations of where land and water meet. Vignettes are symbolized so the land appears to gradually fade into the water, representing shallow areas near shore transitioning into deepening water.

Not wishing to ‘reinvent the wheel’, here are some postings about the creation of coastal vignettes in ArcGIS from the fine cartographers at Esri:

1) Symbolizing Shorelines   2) Ask a cartographer: coastal vignettes  3) FAQ: What are coastal vignettes and how can I create them? 4) Vector and Raster Methods for Creating Coastal Vignettes (ESRI white paper linked from #3).

A cartogram is a map produced using a cartographic technique where the mapped polygons (e.g., county or state boundaries) are stretched or shrunk based on the magnitude of the variable being mapped. This distortion of area can make odd-looking but more representative maps.

One great example of cartograms is from Mark Newman of the University of Michigan. His presidential election maps put a new twist on the “red state vs blue state” maps that have been a staple of TV news election coverage since 2000. 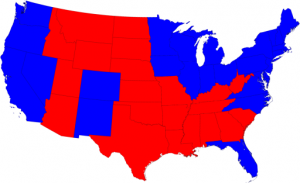 Map of states carried by Obama (blue) and McCain (red) in the 2008 Presidential Election. source: http://www-personal.umich.edu/~mejn/election/2008/

The above map shows whether the majority of voters chose the Republican candidate (in red) or the Democratic candidate (in blue) in the 2008 Presidential election. The size of the mapping units – the states – do not indicate the underlying population, however, and a larger area of the map appears red.

In the map below, the size of each state is altered based on its population. The less populous western states (the Dakotas, Wyoming, Montana…) are reduced in size, while the more densely populated states are increased. Though the shapes of some states are warped significantly, most are still recognizable, and the map gives a more accurate picture of the election results.

All maps are produced using a series of compromises (map scale, data generalization, color choice…)  and statewide election maps do not tell the whole story. Dr Newman has county-based election results maps on his web site that show more details – I encourage you to explore them. He even makes the software for producing them available for free. See also this post from ESRI that discusses cartograms, with a link to an ArcGIS tool for producing cartograms.

To see some cartograms for other areas of the world, visit Worldmapper

I have one final comment on the “red states vs blue states” maps. Having grown up during the Cold War, I find it very bizarre that red has become associated with the Republican Party. “Red” was connected to Communism: the U.S.S.R., China, and the general Communist threat. On the Mercator Projection map of the world (which greatly inflates the size of high-latitude countries, such as the USSR) that hung on my grade school wall, Communist countries were colored red. Not the color I would ever expect the GOP to embrace. Times change, I guess…

There’s a guide from Aileen Buckley and Kenneth Field of ESRI that can be found in the latest edition of ArcUser Magazine.  It’s essentially a 10-point checklist for making a better map.

Color selection for maps can be a time-consuming activity. Computer monitors use additive colors (combinations of red, green, and blue) to create different shades, and monitors are backlit, using transmitted light to convey colors to the viewer. Printed maps, on the other hand, use subtractive colors (most often cyan, magenta, yellow, and black inks) to remove portions of white light reflected back to the viewer.

The main effect of these differing methods for producing colors is that hues you select on the monitor often look very different when printed out in hardcopy. This problem is compounded when different computer monitors or printers are used, as colors you were happy with can change dramatically when viewed or printed on different hardware.

Fortunately, a tool exists to help with choosing a set of colors for a map. ColorBrewer was developed by Cindy Brewer and Mark Harrower of Pennsylvania State University. It is an interactive, web-based tool that allows the user to 1) select the number of color classes needed, and 2) choose color schemes appropriate for numeric data (sequential schemes), numeric data with positive and negative values (diverging schemes with a neutral color in the center and darker colors at the extremes), or nominal data (qualitative schemes).

The color schemes in ColorBrewer were tested with subjects with color-impaired vision. You can choose to use only “color blind safe” colors, as well as “print friendly” and “photocopy-able” colors, though these choices limit the number of color schemes available. The best reason to use ColorBrewer, however, is the colors it provides are easily distinguished from each other.

ColorBrewer provides color information usable in several different coding systems (RGB, CMYK, and Hexadecimal) so it is useful for more than just colors for maps in a GIS. The values for your ColorBrewer color schemes can be exported to an Excel spreadsheet, and there is a plug-in tool for ArcGIS available. It is very user-friendly, but has excellent online help if you need it. Check it out!